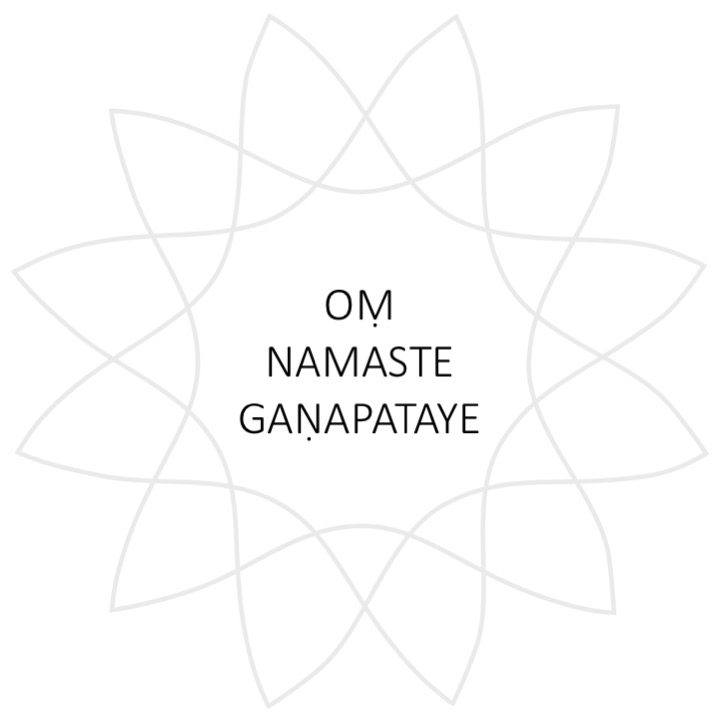 Posted at 09:00h in Blog, Mantra, Music by info@yogiluc.com

oṃ: the first vibration in the universe, the primordial sound from which all other sounds, all words, all languages and all mantras have come forth
namaḥ: salutations, reverence
te: to you, your
gaṇa: group of people
pata: lord
gaṇapataye: to Gaṇapati (Gaṇeśa), son of Śiva and Pārvatī, the elephant-headed deity who is the remover of obstacles and lord of all creatures

“Oṃ namaste Gaṇapataye” is the first line of the “Gaṇapati Atharvaśīrṣa”, a minor and later Upaniṣad, sometimes referred to as the “Gaṇapati Upaniṣad”.
In this Upaniṣad, Gaṇeśa himself is said to be the creator, sustainer and dissolver of the universe. He is furthermore described as the embodiment of the five great elements and of the four levels of speech, as he who resides in the mūladhara cakra, and as the physical embodiment of “Oṃ”.
The Gaṇapati Upaniṣad also introduces the mantra “Oṃ Gaṇapataye namaḥ”, as well as a shorter version of this mantra in the form of Gaṇeśa’s seed syllable “gam”, and finally also a Gaṇeśa Gayatri mantra.

I stumbled upon this verse while I was doing research for my first mantra album BOLO! in 2010, and have released a few other Gaṇeśa mantras over the years. This one remains my favorite. Since Gaṇeśa is traditionally invoked before important events and rituals, I still play this mantra at the beginning of almost every kirtan.

Watch the video on IGTV