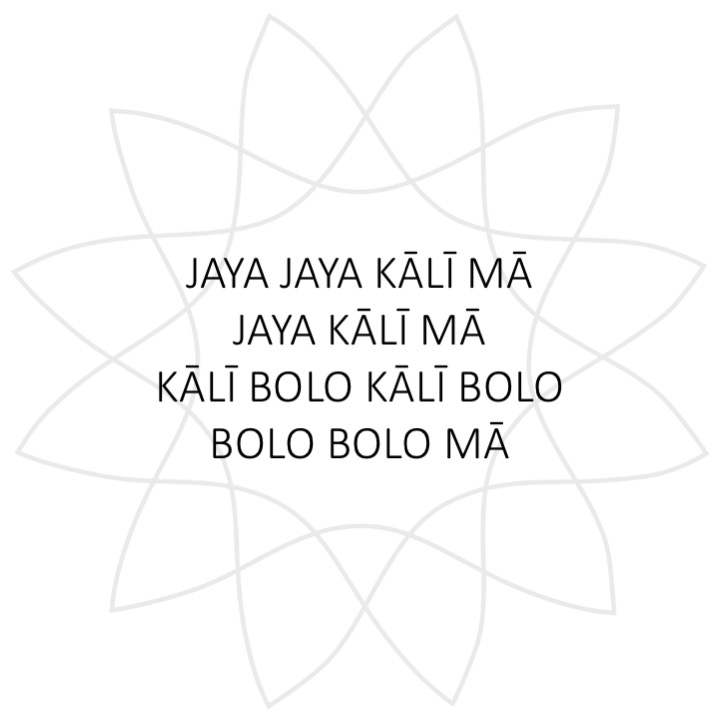 Posted at 08:41h in Blog, Mantra, Music by info@yogiluc.com

This mantra calls upon the divine feminine power in the form of Kālī, whose name literally means “black” or “of a dark colour”. Kālī is known and feared as the dark goddess of time and is depicted wearing a necklace of skulls, her tongue sticking out of her mouth, sometimes dripping blood and covered with snakes. Even though her appearance is dreadful, at the same time, she can be seen as the divine merciful mother who wages war on our ego for our own good and combats evil in the interest of the universe.
In one of the battles between gods and demons, mother goddess Devī is threatened by the demon Raktabīja, who had previously secured a boon from Śiva which made him invincible. According to this boon, for every drop of his blood that falls to the ground, in its place a new demon arises. Kālī comes to the rescue by drinking every drop of blood before it can reach the ground, so that no more demons can emerge, and she finally slays Raktabīja himself by cutting off his head.
Kālī is depicted with four arms, which are interpreted in various ways: the four Veda-s (Ṛgveda, Sāmaveda, Yajurveda, and Atharvaveda), the four stages of life (brahmacarya – student, gṛhastha – householder, vānaprastha – hermit, saṃnyāsa – ascetic), or the four objectives of life (dharma – right living, artha – wealth, kāma – pleasure, and mokṣa – liberation). In one hand, she holds a sword signifying divine knowledge, in another she holds the severed head of the demon Raktabīja signifying the human ego. The third hand is raised in Abhaya Mudrā (palm facing forward with fingertips pointing upward), a gesture of protection and pacification, and the fourth is held in Varada Mudrā (palm facing forward with fingertips pointing downward), a gesture of offering and compassion.

Being in a recording studio with people who know what they are doing and who are there to support and lift you up in a deeply personal creative process, is on my list of incomparable and unforgettable life experiences. It’s truly magical. In the case of HOME, that recording studio was a makeshift studio which was set up in the basement of Erhard and Ulrike’s home in Munich. Recording the album in their loving and welcoming home was the perfect fit for this undertaking. Erhard played tabla and hammered dulcimer on the record, and his little daughter, our special guest and “studio mouse” Asha, provided hand claps on “Jaya Jaya Kālī Mā”.