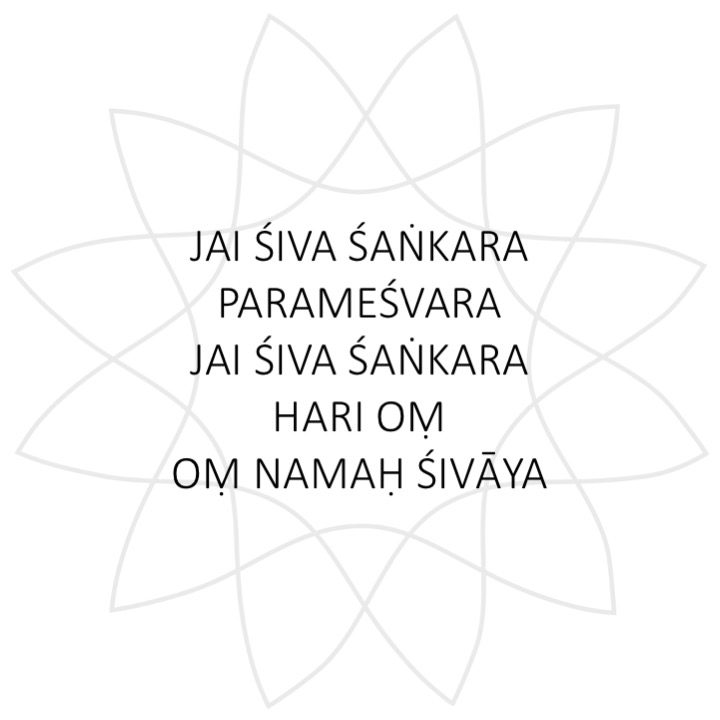 Posted at 18:56h in Blog, Mantra, Music by info@yogiluc.com

jai: victory to, celebration of
śiva: literally “good”, “auspicious”
śaṅkara: another name of Śiva, literally “causing prosperity,” “auspicious” or “beneficent”
parama: highest, supreme, best
īśvara: master, lord, supreme being
hari: “the remover”, referring to Viṣṇu as the remover of evil or sin
oṃ: the first vibration in the universe, the primordial sound from which all other sounds, all words, all languages and all mantras have come forth
namaḥ: salutations, reverence
śivaya: to Śiva, the auspicious one

On the fourteenth day of the dark fortnight of the lunar month of Phālguna (corresponding with February/March in the Gregorian calendar), the annual festival of Mahāśivarātri, the great (mahā) night (rātri) of Śiva, is celebrated. It honors the marriage of Śiva to Pārvatī, princess of the mountain and goddess of sacred marriage. This marriage transforms both god and goddess. On the snow-clad mountain Kailāsa, Śiva lives as an austere ascetic, in the riverside village Kāśī, he becomes the householder Śaṅkara, the benevolent one.
Mahāśivarātri is also the night when Śiva performs the cosmic dance (tāṇḍava) in the form of Naṭarāja, the representation of which symbolizes his five divine acts (pañca-kṛtya). Naṭarāja (lord of the dance) is depicted dancing in a ring of fire, which represents the continuous creation and destruction of the universe.
His upper right hand holds an hourglass shaped drum (ḍamaru), which symbolizes creation (sarga).
His right leg is firmly planted, stamping on the demon of ignorance (Apasmara), which symbolizes preservation (sthiti).
His upper left hand holds a flame (agni), which signifies the force destruction (saṃhāra).
His lower right palm is held up in abhaya mudrā, inviting us to have no fear if we follow the path of truth and righteousness.
His lower left arm is held across his chest, which represents concealment (tirodhāna).
His lower left hand is pointing down at his upturned left foot, which symbolizes revelation (anugraha).
The five divine acts of Śiva can also be linked to the syllables of the sacred mantra:
na: act of creation
maḥ: act of preservation
śi: act of destruction
va: act of concealment
ya: act of revelation

Watch the video on IGTV