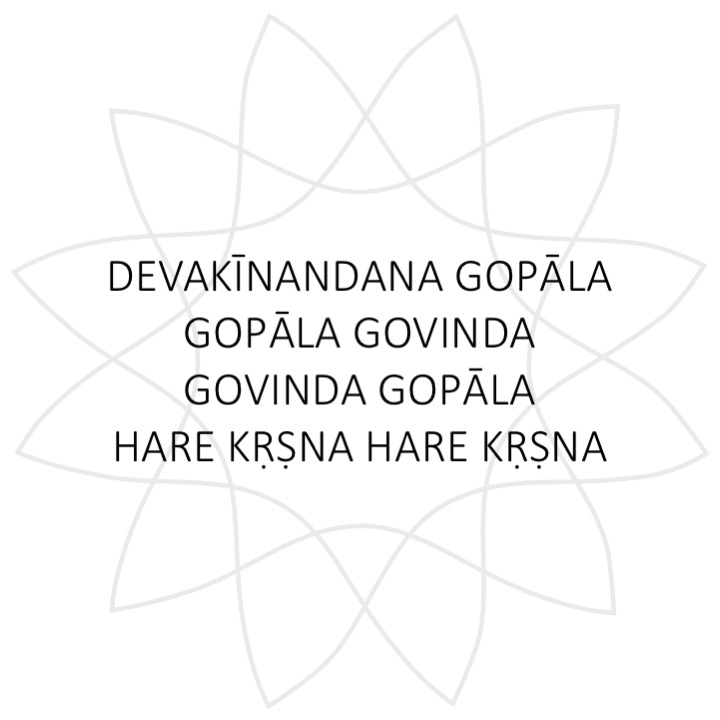 Posted at 17:08h in Blog, Mantra, Music by info@yogiluc.com

Kṛṣṇa is arguably one of the most popular deities in India, born as the son of Devakī and Vasudeva. Because he has an evil uncle, Kamsa, whom Kṛṣṇa is prophesized to kill, upon his birth his father secretly brings Kṛṣṇa to the village of Ambādi (Gokula) in the countryside. Here he is raised by the chief herdsman Nanda and his wife Yaśodā who treat Kṛṣṇa is if he were their own son. The words of the first part of this mantra refer to this part of Kṛṣṇa-s life among the cow keepers (Gopāla-s). There are many stories that illustrate his playfulness, his acts of mischief, and the generosity of his love.
The second part of this mantra refers to Kṛṣṇa as the gentle teacher, the lord of love. It is generally referred to as the Mahā Mantra (literally “great mantra”), one of the most beloved mantra’s in today’s yoga tradition, probably because it has the power to awaken tremendous joy and devotion in our hearts. It was mainly made popular by the International Society for Krishna Consciousness (ISKCON) or Hare Krishna movement.
It can be traced back to the Kalisaṃtaraṇa Upaniṣad, which is attached to the Kṛṣṇa Yajurveda. Kali refers to Kali-yuga, the last and worst of the four yuga-s or ages, literally the “dark” age. Saṃtaraṇa means “conveying over” or “passing through”. In this short text of only three verses, the sage Nārada approaches the god Brahmā and asks him how he would be able to attain liberation in this dark age. Brahmā replies that it is through the simple recitation of the lord that one can remove all evil effects of Kali-yuga. When Nārada asks what these names are more specifically, Brahmā responds with the verse we now call the Mahā Mantra. He elaborates that there are no rules or regulations to be observed when chanting this mantra. It can be chanted at anytime, anywhere, and will purify and immediately liberate any person who sings it.

In 2012 or 2013, I was invited to provide the live soundtrack to a yoga class at Yoga on Call in Ghent. The owners, Dolly and Francis, were supporters of my music from the very beginning, and regularly invited me at their yoga studio to play live during a yoga session and offer a kirtan afterwards. On one particular occasion, Francis and I were improvising “in the zone” when all of a sudden he started playing the most beautiful combination of notes on his guitar. I felt inspired to sing a melody on top of his fingerpicking and used the words of one of my favorite mantras at that time, “Devakīnandana Gopāla”. After the session was over, Francis confessed to me that it was an instrumental piece he had recorded on one of his albums. I was so in love with it that we played it again at the kirtan that followed the workshop. He was so kind as to let me use his chord progression so that I could record our version of the mantra “Devakīnandana Gopāla” on the album HOME. Including the Mahā Mantra was not a part of our original jam session, but it felt like the most natural thing to do.